A Plaque to Lt. Jacqueline Nearne 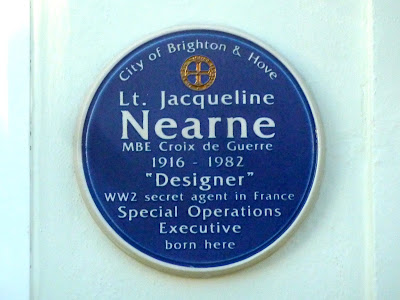 This plaque originally unveiled at a special ceremony in November 2106 has found its permanent home at Jaqueline's birthplace, 32 West Hill Street.

She moved with her family to France in 1923. When France fell, she made her way back to England  and joined the First Aid Nursing Yeomanry.  Nearne's fluency in French quickly brought her to the attention of the Special Operations Executive (SOE) where, in 1942, she trained as a courier for the French Resisitance.

On 25 January 1943, she was parachuted into France to work for the 'Stationer' circuit in central France and maintained contact with SOE networks in the Paris area. She carried spare parts for radios inside a cosmetics bag. After fifteen months in the field, she finally returned to Britain in April 1944.

In 1946 she played "Cat", a character based on herself, in the RAF drama-documentary School for Danger, 1948, about the wartime training and deployment of SOE operatives.