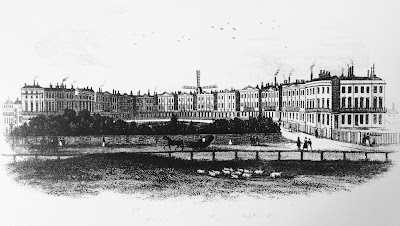 This mid-19th.C etching captures a snapshot in time. Montpelier Crescent,  A H Wilds's masterpiece, was built c.1847. and Vine's mill which can be seen looming above the centre of the crescent was demolished in 1850.

This view looking east from what was then open fields shows the central part of the crescent. This is now grade II* listed. The end houses had yet to be added at the time this view was captured. These were added in 1855 and are now grade II listed.

Preceding its demolition Vine's mill had been operated by Edward Cutress. The Cutress family remained in milling and in 1935 took over control of the old-established Forfars. Forfars went into liquidation in 2015.