These gems of the Tudor Revival style lurk in the little frequented and strangely named High Street, nos. 23 - 30. They tick all the boxes; half-timbering, gabled dormers, mansard roofs, stone-arched doorways, and mullioned windows. The narrow street makes them difficult to photograph and they are always partly obscured by cars.

They are grade II listed the description for which includes a mention of the scattered fenestration and that the individual units are designed to form an irregular and picturesque grouping by simple variations on a common type; only No.27 is really unique, forming a central point of emphasis. The other units are assembled from a limited number of features and finishes. 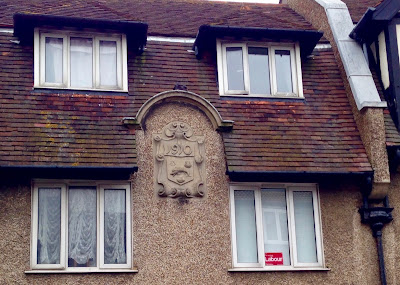 Between Nos 28 and 29 is a round gable which bears a shield inscribed with the date 1910 and the Corporation's arms. All the cast-iron downpipes are original, one of which can be seen on the right.

They were designed by local architects Clayton & Black and the ravages of time appear to have left them largely untouched. It would be good to be able to say the same of more modern buildings.