The proposal includes significant gains for the public realm in one of the most congested part of the city. 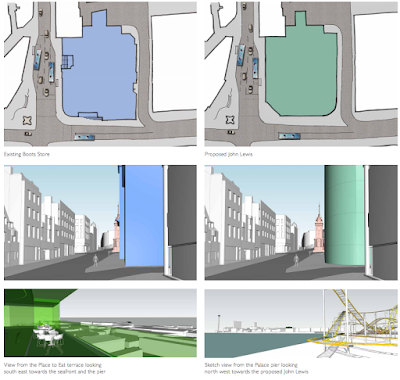 The existing Boots builds right to the edge of the site, which provides minimum space for the public realm on North Street and Queens Road and no pavement on Windsor Street.

The proposal sets the new building back from the ownership line to create more pavement space to all roads.

A new main entrance will be provided at the corner of North Street and Queens Road. This is further set back and splayed to create an easily accessible entrance with 10m of space between it and the pedestrian crossing.

In setting the façade back on North Street, views of the Clock Tower that were blocked by the existing building will now be visible, enhancing its relevance to the spatial orientation of the city.

On the top floor of the building an external terrace will be provided that will give views to the sea and pier.