Works to repair crumbing kerbstones and resurface the roundabout are now set to be complete by next Tuesday morning - 4 October.

This will entail the roundabout being entirely closed overnight on Monday 3 October into 4 October.  This is 3 days earlier than originally estimated. All entrances and exits to the roundabout will be shut from 7.30pm on Monday night until an estimated 6am Tuesday morning.

It is intended that suppliers will foot the repair bill, not the council. 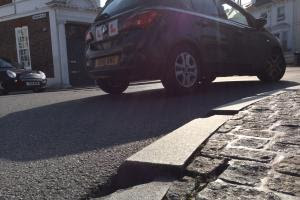 The project was essential because a low kerb encircling the roundabout had started to break up.  This was happening because it stood above the level of the road surface and was being frequently struck by vehicles. Recent works involved lowering the kerb flush with the tarmac and resurfacing the whole roundabout.

The junction was radically altered in 2013, to make it less dangerous while improving the environment and streetscape of Seven Dials village.  The previous chaotic mini-roundabout was replaced with a longer, oval traffic island.  This sought to integrate traffic more gradually instead of vehicles converging on a central point.
at 22:38