The planning applications BH2013/04351 and 04348 filed just before Christmas have been declared invalid by Council planners. It is understood that they lacked details and drawings necessary for a listed building and a feasibility study. This is somewhat surprising considering the efforts that were being put into these proposals. New applications are expected soon.

The video below provides a short tour of the development as it is visualised on completion.

There seems much to welcome in the plans, not the least that it is the only realistic game in town to save the basic fabric of the much-loved Hippodrome; but it also seeks to do so in a way that restores and invigorates a somewhat run-down area of the Old Town. Rather than resorting to imitation or pastiche it should be perfectly acceptable for each age to leave the stamp of its own architectural style on the built environment thus adding to the sense of organic variety that makes historic centres so attractive. 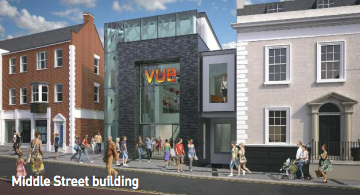 Everyone  will have their own opinion but to my eye the cinema entrance proposed for Middle St. seems excellent in detail & scale with the upper edge of the black-tiling aligning approximately with the eaves of adjoining buildings. 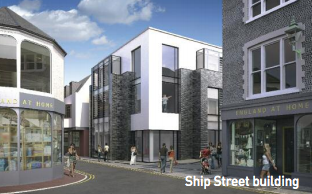 On the other hand the building proposed for the Ship Street entrance appears too tall and bulky and too dominating for the narrow pavements and small scale of the nearby buildings.