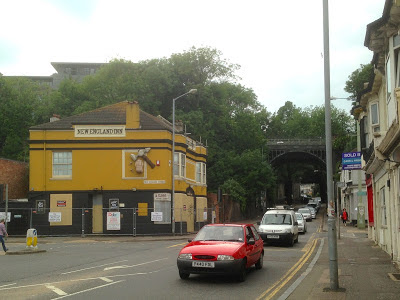 The New England Inn (latterly the Cobbler's Thumb), although neglected and unsympathetically painted, forms a historical and harmonious pairing with the listed goods bridge in the background and is still an elegant adornment of an important corner. It was the public house of choice for hundreds of the railway workers who passed it on the way home from work to their nearby purpose-built dwellings. It is ironic that, while the goods bridge awaits a long planned "ghost train" sculpture to commemorate the past industry of the area, a still-standing memento of the era is scheduled for demolition.

The building is owned by the Council and on 21 May 2013 they submitted planning application BH2013/01664 for prior approval to demolish the building on the grounds that it had become unsafe. From a casual inspection this seems surprising. The pub has only been closed a few years and the roof appears sound and all 4 walls stand square and intact. The only sign of deterioration is associated with a later extension on the south side. These extensions often tended to be jerry-built and in this case its foundations appear to be failing and the masonry is pulling away from the original wall. One would think this could be easily rectified  by demolishing the extension. The building could then be renovated and converted to several flats as has happened to public houses elsewhere in the City. 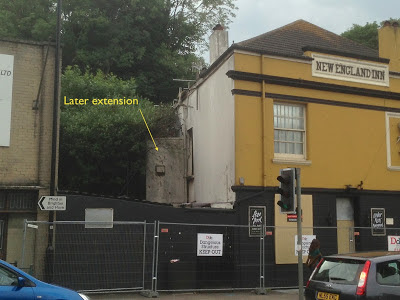 As seems to happen all too often the Council is defaulting to a simplistic solution without proper consultation. The decision on the planning application was that prior approval was not needed, so the fate of the building still hangs in the balance. Representations have been made. The Council should surely think again.