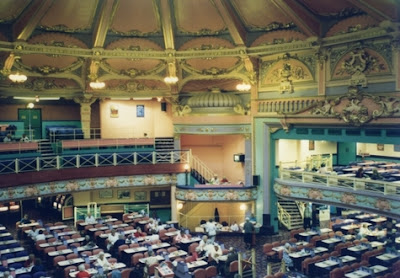 Brighton architects Russ Drage have been working 7 months on plans for restoring the Hippodrome and returning it to viable use. The Hippodrome and Duke's Lane have the same owner and the site being considered, much of which is hidden to view, is of similar size to that of the Brighton Centre.  The plans ambitiously extend to enhancing the whole area by re-modelling Duke's Lane, creating a new public square off Middle Street, re-fenestrating Hippodrome House, and revealing the Hippodrome's spectacular dome to street view, probably for the first time in 100 years.

The Hippodrome has acquired several layers of decor in its history but restoration will be targeted at the Matcham -Walker interior of 1915 which is what is mostly seen today. The main alteration needed to adapt the space for present day viable use will be the installation of a new floor at the level of the bottom of the balcony thus dividing the auditorium horizontally into two sections. The lower sections will contain 3 self-contained cinema auditoria.  The upper section will be restaurant space allowing patrons impressive views of the tented dome and ornate decor. All alterations are intended to be completely reversible so that the building could be returned to theatre use if ever this became an economic proposition.

The plans are expected to go out to public consultation  this summer and  a planning application submitted in September.