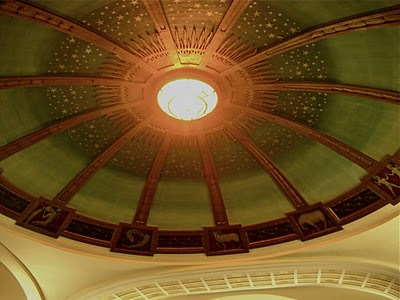 In the large meeting chamber of the Sussex Masonic Centre in Queens Road the ceiling is domed with a central light-fitting. This serves as a sun motif radiating out to signs of the zodiac around the circumference. Men of any religion or none are accepted into Freemasonry so long as they are prepared to affirm their belief in a Supreme Being.

Thomas Paine in his 1818 essay, "The Origins of Freemasonry" says that  "the christian religion and Masonry have one and the same common origin: both are derived from the worship of the Sun. The difference between their origin is, that the christian religion is a parody on the worship of the Sun, in which they put a man whom they call Christ, in the place of the Sun, and pay him the same adoration which was originally paid to the Sun." 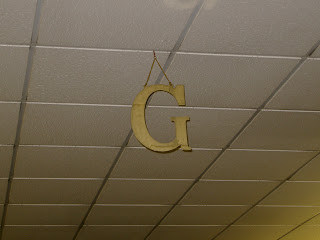 Apparently there is no bar on a Muslim becoming a Freemason but I am not sure how they would cope with the big "G" suspended from the ceiling of one of the smaller rooms. . . .