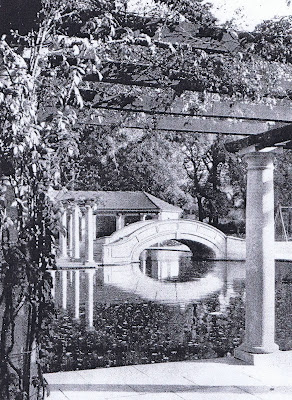 Vandalism, passage of time and simple lack of adequate funds has degraded much of the elegant layout designed, and developed from 1929 onwards by the then Superintendent of the Brighton Parks Department, Captain Bertie Maclaren.

The aim of his design for the 3 acres of the southern section was to provide 4 separate childrens' play areas; infants, toddlers, boys and girls in 4 separate sections and to integrate them into an attractive setting while preserving vistas along the axis of the valley. Infants' and toddlers' play areas were placed at the southern end on either side of the central path and boys' and girls' areas to the north of this and partly screened by pergolas. The pool was intended for model boating. The Captain was at  pains to provide as great a variety of activities as possible to avoid boredom.

As can be seen from old photographs the final result of the Captain's scheme was very attractive and the Council's decision to base its enhancement project on a major re-interpretation of this design, taking account of modern usage and the need for sustainibility, seems worthy of strong support. This will ensure a high probability of a successful application for Heritage Lottery funding which is such an essential component of the project. The aim of the project remains broadly the same as in the Captain's day, to attract to the area the widest possible spectrum of users and so ensure misuse and vandalism is kept to a minimum. 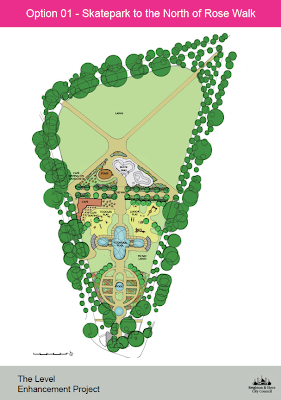 Although the proposal to site the skate park in the north-west corner of the Level has been abandoned, its final location remains in contention among different community groups.
It would certainly not be inconsistent with the original layout to leave it where it is, on the site of the former boys' playground. However one of the options provides for it to be moved to the immediate north of the rose-walk as shown on the right. It would be rendered fairly inconspicuous by being sunk into the ground and the loss of grass would be compensated by the re-grassing of the under-used gravelled triangle on the western side as shown. This would have the advantage of allowing a more spacious and diverse redevelopment of the southern section, so increasing its attractiveness to the general public. It would also provide better separation of skaters from the areas to be specifically provided for young children.

The Council project team aims to hold the widest possible consultation on the scheme in March and has the unenviable task of coming to a final decision based on numbers of supporters rather than the most vociferous. It is inevitable that not everyone can be pleased. Captain Maclaren, of course, did not have this problem. From his spacious office in Moulescoombe Place, where he occupied a large desk overlooking the gardens, one imagines that the phrase "public consultation" would have had him lost for words. 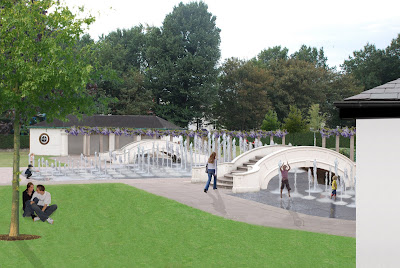 A photomontage showing a possible water feature created on the footprint of the original pools.
at 19:57