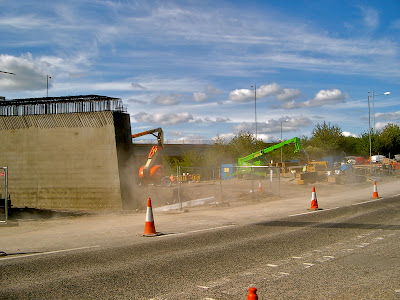 From a City Council press release:

A new road junction and flyover, seen above during construction, have opened on the A270 near the Albion's Amex Community Stadium at Falmer.

The £5m scheme, funded by the South East England Development Agency (SEEDA) and led by Brighton & Hove City Council, was a condition of planning permission for the stadium.

As well as being linked to the stadium project, the new road layout will improve access to academic buildings along the Lewes Road and the proposed new historical archives centre, the Keep, which secured planning permission earlier this month.

The junction offers access to Stanmer Park and major buildings nearby, while the 300m flyover enables traffic from the Lewes direction to bypass this and head straight into central Brighton. Read more.
at 16:50