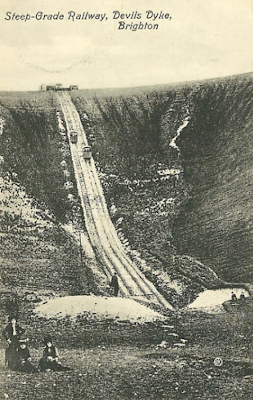 This railway operated from 1897 to 1908, enabling visitors to the Dyke to descend the steep north flank of the Downs to the west of Poynings Village and, probably more importantly, ascend again to take the conventional Brighton to Dyke railway back home. In those days the transport from Poynings to Brighton was probably rather limited. The gradient here is as steep as 1 in 1.5 in some places. The remains of a  platform can be found at the top of the hill and the track of the railway can still be discerned when viewed from below.

The use of the funicular system, in which one car provides a counterweight to the other, dates from at least the 16th century but there was a big surge in their construction in the latter half of the 19th. Throughout the UK about a dozen still remain in operation, including, in Sussex, the West Cliff at Hastings. This provides easy access from the promenade to Hastings Castle. The Hastings East Cliff railway closed only recently.
at 17:18