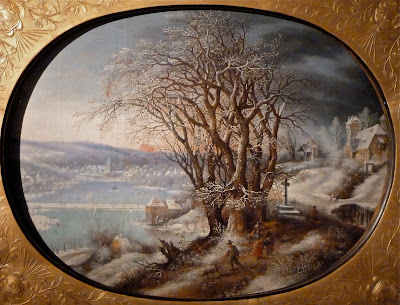 To mark the season Brighton Museum is displaying, in pride of place on the staircase, the very atmospheric, "A Winter Landscape with Distant Village" by Denys van Alsloot.

Brighton is fortunate to have such a painting since only about 30 of van Alsloot oil paintings survive. The painter lived 1573 - 1626, the son of a tapestry maker in Brussels, and joined the artists guild there in 1599. In the same year he was named official artist to Archduke Albert and Archduchess Isabella, for whom he created landscape paintings, images of court festivities, and designs for at least one set of tapestries. In 1615 he was commissioned to produce  a series of paintings recording the Ommegang, a splendid court procession through Brussels, during which Isabella was made Queen of the Crossbowmen's Guild. One of these paintings fetched €13,000 at auction in 2008.