On a fine summer day the pool, built in 1936 on a raised terrace above the sea, was an idyllic spot with the white cliffs in view to the east, Brighton to the west, seagulls overhead. . . . And it was filled with sea-water which was ozonised, not chlorinated, and so did not sting the eyes. The late art deco building itself, with cafe, sun terrace, ochre-coloured walls, formed an elegant architectural landmark, at the start of the Undercliff walk, in the long progression of the seafront.  There seemed to be a wonderful logic to it all . . How could there not be a pool at Black Rock?

By the 1970s the answer came in the combined effects of a series of bad summers and cheap air-travel and it was demolished in 1978. All that remains are two sets of steps (and a still derelict site). A passageway led from Madeira Drive which passed behind the pool to the Undercliff walk. From this passageway these round-nosed glazed steps gave access to the back of the pool building towards the eastern end:- 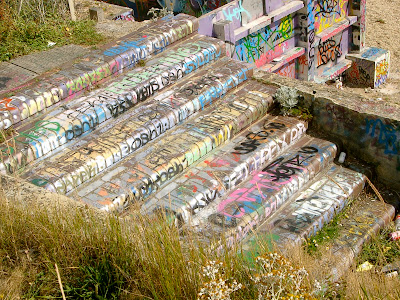 At the western end these led from the passageway up to the Madeira Drive pavement:- 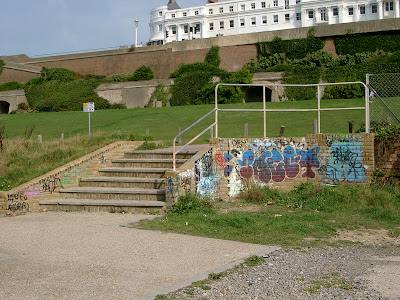