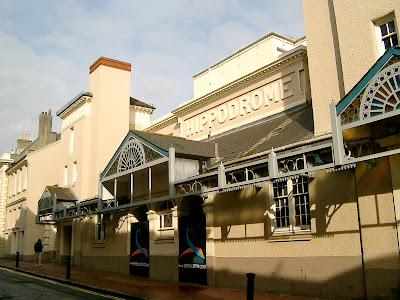 The Grade II* listed Hippodrome, in Middle Street, has been a cause of concern for some time. When a building just sits without being used or properly maintained the effects of the weather are remorseless. I visited it a few years ago while it was still being used as a Bingo Hall and although the stalls were hidden under a false floor most of its florid, glorious decor was still visible and in reasonable condition. It was designed & built in 1897 for an ice-skating rink but converted in 1901 for the type of theatre; variety, pantomime and circus that was so popular before cinema and televison sounded their death knell. Bingo at least kept it in use, but 3 years ago even that fell out of favour, and the building has been shut up while the leaseholders, the Academy Music Group, have been exploring its use as a live music venue.

Today the Argus reports that the Theatres Trust has added the Hippodrome to the 2010 list of buildings that need special attention and that restoring it will cost more than £9 million. Obviously, in the present economic climate this does not augur well, but at least Brighton's Hippodrome is somewhat happier placed than Derby's whose owner wants to turn it into a carpark.

Extract from Theatres Trust Report:-
"The Brighton Hippodrome is an architecturally significant conversion of an 1897 ice rink to a theatre. The conversion retained the restrained stuccoed façade to Middle Street but included an opulently decorated near- circular auditorium. Originally a dual purpose circus/variety theatre, and now possibly the finest surviving example of its type in Britain. The most spectacular feature of the auditorium is the vast ceiling in the form of a panelled tent which covers the whole space and is richly decorated with boldly modelled Baroque plasterwork. At the centre is a balustraded gallery, reminiscent of (but not the same as) the one at the London Hippodrome before it was altered. The ‘Palm Court’, with its false bridge has undergone some alteration but is an impressive room with paintings which appear to date from the original ‘art decorations’. The body of the theatre is intact, with only superficial alterations (the levelling of the auditorium, for example, which ‘submerges’ part of the lower boxes). It could be readily restored to use."
at 21:35