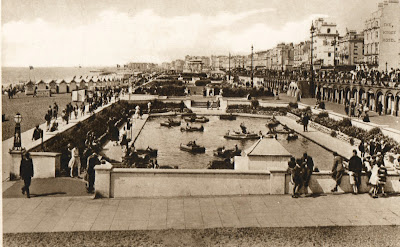 The simple pleasures of the yesteryear when people paid good money to float about on a stretch of dirty-looking water smaller than a tennis court. This photo must have been taken before Embassy Court was built in 1935. The 2 storey villa Western House that it replaced can just be made out in the distance beyond the Norfolk Hotel. The boats were propelled by hand-operated paddle wheels. Later-on they were replaced by motorboats which had very low-revving two stroke engines and which chugged around at less than a walking pace. Consequently they had hardly any steerage-way on them but at that speed it hardly mattered.

Note the elegant lamp standard on the extreme left. These were placed at intervals along this section of the lower promenade.  I believe they were made of bronze and that at least some survived WW2. Whether they would have survived the modern tribes of urban plunderers is doubtful. In any case they were long ago replaced with ugly utilitarian  lengths of galvanised scaffold poles surmounted with plasticky lamps which are no longer operational. These can be seen in the modern photo below:- 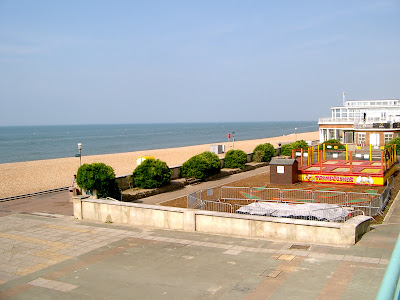