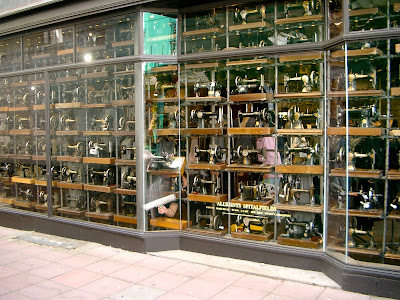 Front, side and rear windows of this shop in East Street are entirely filled with arrays of antique sewing machines. So effective are they as a screen that, with a quick glance, it is difficult to make out what the shop is selling . In fact its stock has only the vaguest connection with the window display.  The British 'AllSaints Spitalfield' brand of clothing was launched back in 1994 and was named after All Saints Road in Notting Hill. It now has over 50 stores worldwide.

It seems ironic that a shop selling very expensive clothing decorates its premises with an item made redundant in its tens of thousands by the 20th century boom in cheap imported clothing .
Click on the photo for a larger picture.
at 15:16