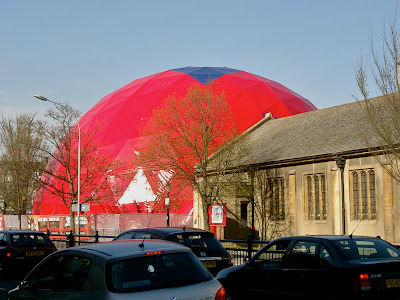 Brighton Festival seems to be finding new ways to challenge us, and not just in the artistic field. The fascinating structure that has appeared behind St.Peters to house the "Freerange" events is known as a "geodesic dome". At first glance the supporting lattice-work appears to be constructed of equilateral triangles but in fact this is not the case. Two slightly different sizes of triangle are used neither of them exactly equilateral. One size is used to form a number of slightly dished hexagons and the other size to fill in between them. The vertices lie approximately on great circles or "geodesics" of the dome's surface, hence the name.

Various attempts have been made to employ these domes for more permanent constructions around the world. It has been  suggested that if the same methods of mass production used in the car industry were also used for geodesic domes, everyone in the world could afford shelter.
at 22:47