Prinny's piano to return to Pavilion 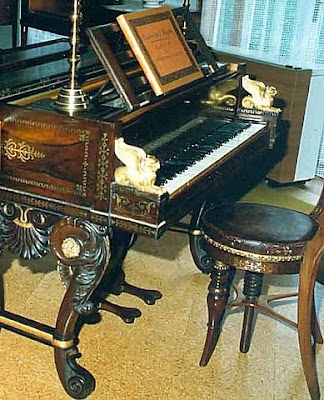 The Royal Pavilion & Museums Foundation has supported the purchase of King George IV’s only surviving grand piano at auction.  The historic piece was secured after a successful bid of £62k was made using money from Art Fund, Arts Council England/Victoria and Albert Museum Purchase Grant Fund, The Leche Trust and the Royal Pavilion Foundation. The piano could be on display at the Royal Pavilion as early as the Easter weekend 2017.
The piano, commissioned for the Royal Pavilion by George IV in c.1821, was made by Thomas Tomkison and is the most celebrated of Tomkison’s surviving works. The maker’s flamboyant approach to case decoration is thought to have appealed to George’s Francophile and adventurous taste. The piano, described as an elegant, rosewood grand, is extravagantly decorated, inlaid with brass, gilt mouldings, and gilt turnbuckles and has elegantly carved legs.

At a cost of £236 5/- the piano was well over twice the cost of a standard top quality English grand piano at the time. Accounts reveal that Tomkison supplied other ‘extra elegant’ pianos to the Prince Regent, but no others are known to have survived.