For many decades the summer scene in Preston park has been graced with the sight of white-clad bowls players on emerald, beautifully manicured greens. But now no more. Two greens went out of use several years ago and were turned into wildflower "meadows". Another went last year, the last has gone this and is already showing signs of neglect.

Consequently the Men's Pavilion, is now redundant in its original purpose. It is a nice little building that was once used as the back drop of one of the scenes in the film 'The First Gentleman' the story of a romance between the daughter of the Prince Regent and Prince Leopold of Saxe-Coburg. This was also filmed partly in the Royal Pavilion—the first film to be shot there. 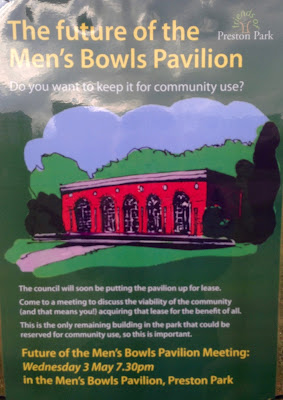 The council will soon be putting the pavilion up for lease and a meeting is to be held to discuss the viability of the community acquiring that lease for the benefit of all. This is the only remaining building in the park that could be reserved for such use.

The meeting is on 3rd May at 7.30pm in the Men’s Bowls Pavilion.