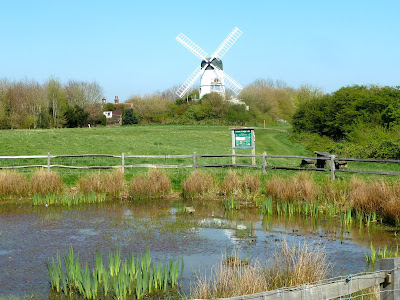 The listed Patcham (or Waterhall) Mill has been beautifully restored over the last decade or so. It is good to know its future as a landmark is assured.

The most picturesque view of it would be from the south-west with the Green Ridge dewpond in the foreground. Unfortunately this view is ruined by an insensitively sited noticeboard.

Extract from My Brighton & Hove:-
"Waterhall Mill is now more commonly known as Patcham Mill . A tower-mill built in 1884-5 for baker Joseph Harris, it was the last working windmill to be erected in Sussex and continued to grind corn until 1924; part of its machinery came from the old Preston Mill. It was sold for just £50 in 1928 and was converted into a house in 1936, but it was used by the Home Guard during the war before reverting to private use in 1950. The mill, which has a rendered tower forty feet tall, was completely modernised in 1975 with new sweeps, and is now a desirable residence and listed building."
at 19:51