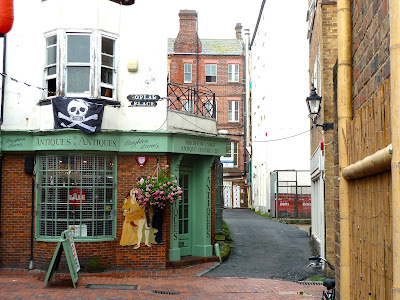 The above photo show a view across what was once known as 'Poplar Place' into Clarence Yard. The viewpoint is from the west end of what is destined to become the new 'Hannington Lane'. Poplar Place was named after a row of poplar trees which once grew down the centre of the lane. It is now part of 'Meeting House Lane' and the only evidence of its existence is in the slowly disintegrating nameplate above the corner shop.

Clarence Yard has no street nameplate but is first mentioned in the 1846 street directory when it contained a wheelwright and a coachsmith. One can just begin to visualise the vibrant scene it must once have presented with the clatter of coaches, passengers, trunks being loaded/unloaded, ostlers caring for the horses, and the noises of the workshops. Even in 1973 the yard still housed a motor engineer. Now it only has a tattoo parlour.

It would seem to be especially worthwhile in a tourist area to preserve some evidence and ambience of the past. Ceramic tile nameplates, of the type shown, where individual letters are housed in a cast iron frame are being restored by the Brighton & Hove Heritage Commission in other parts of the city.  Perhaps they have 'Poplar Place' already on their list. Perhaps even 'Clarence Yard' could be dignified with its own period-style nameplate.