A scheme to pedestrianise East Street could soon go ahead after the council met a government inspector’s calls for a safe alternative route for vehicles.

In October 2012, the city council approved a plan to remove traffic from three key locations in the Old Town, including East Street.  However at a subsequent public inquiry a government inspector said the effects of the scheme on Little East Street should be looked at in more detail.

Traders in Little East Street had voiced concerns about the impact of passing traffic on the ambience – particularly for people eating or drinking outside.  They also cited congestion, delivery problems and safety of pedestrians. 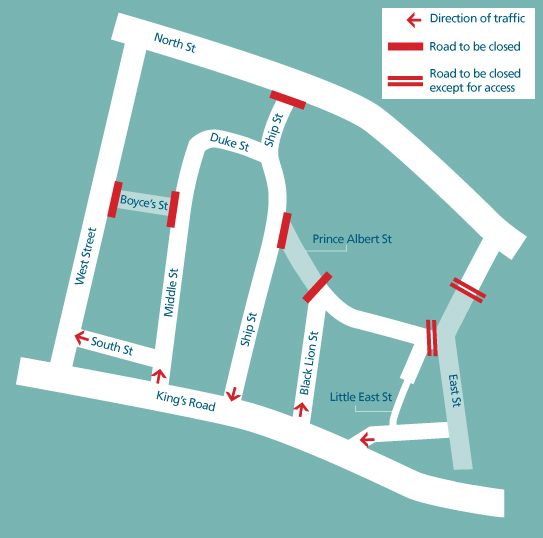 As a result the council has now amended the scheme, with features like speed humps and safety railings.  To ease deliveries, a new loading bay and passing points will be created.  An independent safety audit has since said the plan is now categorised as ‘low risk’.  It concluded pedestrians would be safe because of low vehicle speeds involved – typically 12mph at the north end and 5mph at the seafront end.  Analysis has concluded that even the very largest vehicles could move safely though the street.

If a final go-ahead is given by councillors, it is expected East Street will be pedestrianised by the end of November, with no access for vehicles between 11am and 7pm daily.

Under the Old Town plan, Ship Street has already been closed to vehicles at the junction with North Street.
at 22:28