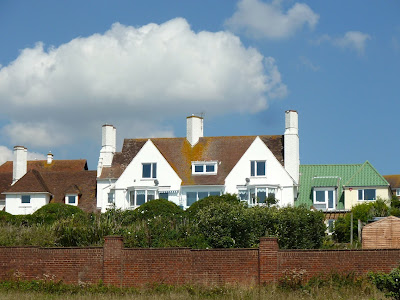 The White Lodge, 40 The Cliff, Roedean, was designed in the early 20's by Sir John Simpson the architect of Roedean School, just half a mile due east. Sir John was the oldest son of local architect Thomas Simpson of 16 Ship Street and had a distinguished architectural career. He also designed West Down School, Winchester; some Lancing College buildings; Haileybury College and Gresham's School, Holt. He was President of the RIBA, 1919-20, and knighted in 1924. 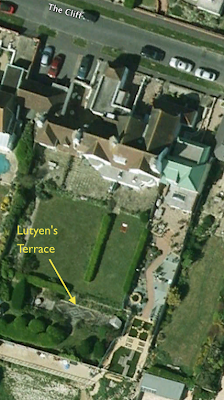 Extraordinarily, associations of the White Lodge with illustrious individuals does not end there. The first occupant of the house was Lady Victoria Sackville who moved there from 38-40 Sussex Square which she had had completely remodelled by her very close friend the architect Edwin Lutyens. 'Ned' as she called him was further called on to alter The White Lodge to her liking which included adding the two symmetrical wings. In the garden there is still a terrace of white limestone and black slate said to have been worked on by Lutyens himself.

Sadly such an architectural provenance was of little concern to 20th.C developers. In the late 1980's  the original square-paned window joinery was replaced with uPVC and the east wing was re-roofed with glazed green pantiles. Thus the lamentable results seen in the top photograph. One wonders if Brighton's planning department were asleep! Notwithstanding, this still remains the best viewpoint of the house; the elevations facing The Cliff are even more of a dog's breakfast.

With thanks to Andrew Doig for information supplied
at 19:47