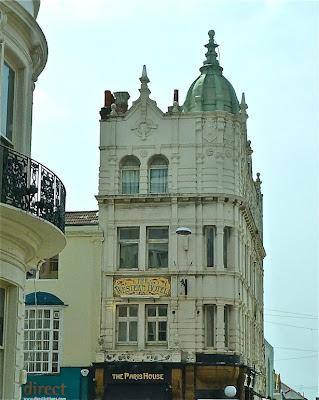 Number 21, The Western Hotel, is included in the Local List for Hove where it is described as a; "splendid, exuberant, largely original Edwardian pub now known as O’Reillys". That was back in 1996. It has since been the "Jugglers Arms" and is now "The Paris House", which does seem to suit the style to some extent. However, one wonders as always, what is wrong with the original name  especially since the original, fine mosaic is still largely intact. The Brighton & Hove Pevsner gives the building a passing mention by calling attention to its; "opulent Late Victorian display". "Victorian" seems more accurate than "Edwardian", especially if one is referring to style rather than date. Shame about the neglect of the upper floors and the modern slapped-on lamp-fitting. 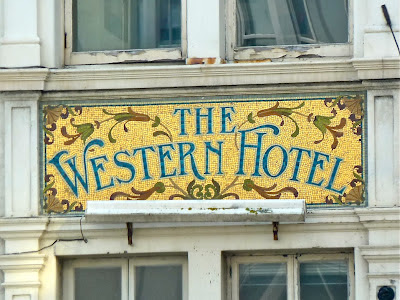 The contrast in style with number 20 to the left could not be starker. Its upper floors are Grade II listed with English Heritage and the reason becomes clear when one's eye falls on the ammonite capital. It is said to be by local architects Charles Busby and Amon Henry Wilds. Unfortunately the ground floor was gutted for a new shopfront only a few years ago. In the listing, attention is drawn to; the hipped or pyramid concrete tile roof concealed behind parapet; the curved corner frontage at the junction of Western Road and Upper Market Street; the Ionic pilasters to curved corner and framing window bay onto Western Road, and the plinths cut by inserted fascia of 36-pane bow window with shallow half-dome. 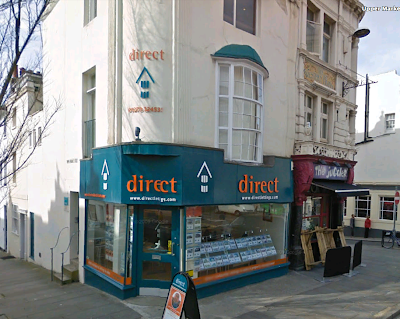 Number 20 was built some 70 years before the Western Hotel. It is otherwise difficult to understand why one should enjoy statutory protection and the other not. They form a fascinating pair and each would be poorer without the other.