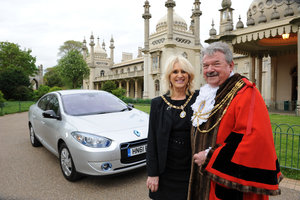 The Fluence Z.E. car has been provided free of charge by Renault and will be used to take the Mayor to hundreds of community events across the city.

Renault is providing the free car for six months, with the possibility of an extension. The council will cover the insurance and running costs.

"This is great news, not just for the environment, but for the taxpayer too as the electric car won’t cost them a penny,” said Cllr Randall.

Kept at Kings House, the car can be charged at the many electric car charging points in the city, and even plugged into a normal domestic socket!

The existing Mayor's car, a hybrid Toyota Prius, which was due for replacement, will be put up for sale.

Running costs for the Fluence are expected to be lower than the Prius, which switches between an electric motor and petrol engine, depending on driving conditions.

The six month loan of the car will enable to the council to look at the viability of replacing the Prius with an electric car once the loan period is over.
at 19:33