It is disappointing that, at a recent meeting, the Conservation Advisory Group recommended refusal of application BH2011/03227, chiefly on the grounds of the proposed hotel's height & bulk. A site at the end of a 'square' such as this surely requires completion with a moderately imposing building. It may be that the design can be criticised on matters of style or detail but it is difficult to conceive how any lower edifice could fill the gap in an aesthetically satisfactory manner. 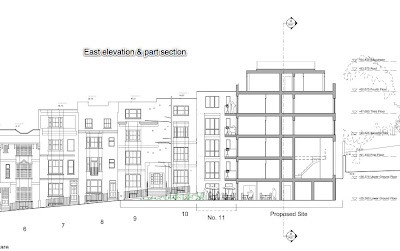 The existing no.10 Queen Square rises to five storeys including a semi-basement. No.11 is to be rebuilt as part of the hotel, but, following the roofline trend of the street, will be 1 metre higher than no.10, again only with five storeys. The hotel accomodation shown in section will also be five storeys with the lower ground floor slightly above the basement level of no.10.

Superimposed on the 5th floor is a "lantern" storey housing service equipment. The hotel is therefore one storey higher than those in Queen Square, not "two or three" as some claim. Furthermore the sixth storey does not extend to the full plan area of the hotel but is set back from its outside wall on all sides so becoming  inconspicuous.

The total height of the hotel is a little more than 18 metres. Concern has been expressed over the overshadowing of the churchyard, but it seems inevitable that any economic use of the site will involve a building higher than the existing. Any practicable reduction in height would have only marginal effects on the churchyard but could critically compromise the appearance of the development in Queen Square.

At the rear the upper ground floor is separated from the churchyard wall by a passage way. If this passage way were to be widened, at the expense of the internal accommodation, the shadow cast by the building on the churchyard would be mitigated somewhat, but only on a little frequented part of the churchyard. (Hence an earlier suggestion for the creation of a permissive foot path through the hotel). The hotel would, in effect, be gaining an extra outside area it cannot use, at the expense of providing an extra piece of unshadowed churchyard that the public doesn't use.

Turning to consider effects on Wykeham Terrace, the hotel will rise approximately 7.5 metres above Wykeham Terrace as shown below but because of the geometry will not be in the line of sight of a pedestrian in Dyke Road over 40 metres away. 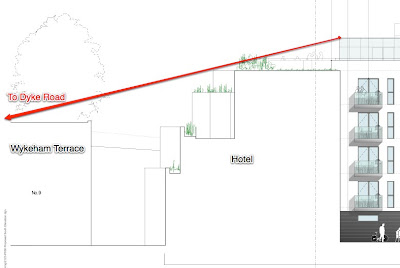 It is true that as one climbs into St. Nicholas churchyard or up Dyke Road the new hotel will come into view behind the end properties in Wykeham Terrace. The applicant has supplied the visualisation below in which the viewer is on eye level with the Wykeham Terrace rooftops.  This is a puzzling picture and not doing the applicant any favours. It is surely showing at least one floor too many of the hotel according to the geometry suggested by the sectional drawing. Whatever, there seems to be no area in the neighbourhood where the houses of Wykeham Terrace, viewed from the front at ground level, will be over-topped by the proposed hotel. 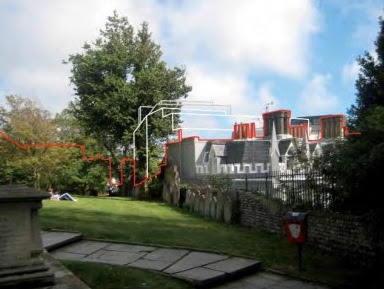 Higher still in the churchyard one gets a fine view towards St. Pauls and the sea as shown in the photo below. In this view the west end of the hotel would be visible between the two trees on the left. The view of St. Pauls, centre, will not be obscured. 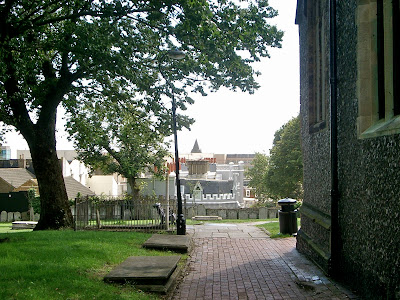