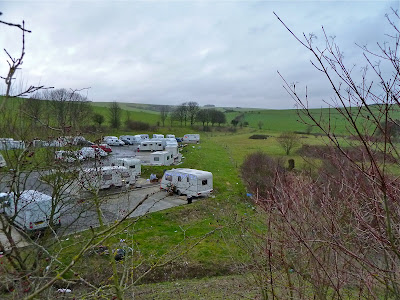 This piece of land, formerly part of the Brighton Rugby Club playing field, was quickly colonised by travellers when the A27 Brighton bypass was opened in 1996. Over the following two years the number of caravans rose to over 180 and the situation became quite chaotic.  In 1998 the Council sent in the bailiffs and the travellers scattered throughout the City leaving behind an indescribable mess.  The Council then drew up proposals for a legal transit site, and opposition of local residents crumbled when the Government refused a public enquiry in December that year.

A permanent site, with drainage and toilet facilities and hard-standing for 23 caravans, was opened in September 1999. Occupants had to prove a need to stay in the area, were charged £40 per week and  limited to 6 months stay at any one time.

In 2002 the travellers received a £2000 grant from the Scarman trust for play equipment. In 2005 the Council was awarded £159,000 from a Government grant to help towards an upgrade of the site including provision of an electricity supply. In 2009 the rent was increased to £60 per week and occupants were limited to 1 months stay with a possible extension to 3 months if their plot wasn't needed.

There are now proposals to extend the site northwards by adding a further 16 pitches dedicated to long-stay "travellers" who will have to supply evidence of close ties with the neighbourhood. The whole site is now in the South Downs National Park, the Authority for which will have to give planning permission. They have asked for two other sites to be reported on for comparison: Waterhall Farm and Hangleton Bottom.

Brighton has long operated a somewhat tolerant attitude towards travellers, reinforced in recent years by the Human Rights Act, but all efforts will only scratch at the problem unless other councils in the South East make similar efforts.