A painting, by Reginald John (Rex) Whistler, aged 16. Six years later, in 1927,  he completed perhaps his most famous work, the murals in the restaurant of Tate Britain.

In Brighton he is famous for "HRH the Prince Regent Awakening the Spirit of Brighton", 1944. This hangs upstairs in the Royal Pavilion and was the centre piece of a major exhibition in Brighton Art Gallery in 2006, "Rex Whistler: The Triumph of Fancy". It was originally painted on the wall of a house in Preston Park Avenue where Rex Whistler was stationed during WW2. 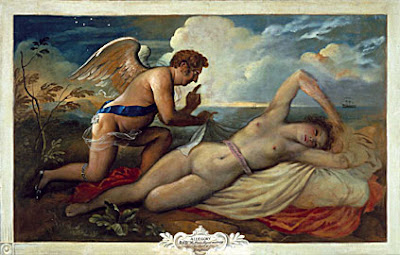 Interestingly this painting has become seriously darkened with age and perhaps, being on wallpaper, the possibilites for restoration are limited. Only the techniques of digital photography allow it to be appreciated in anything like its original state.

Rex Whistler was subsequently killed in Normandy in 1944 and, according to his wishes, expressed only hours before, was buried where he fell.