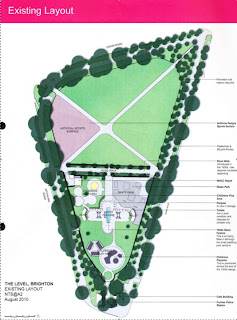 The City Council has put forward  proposals to locate a new skateboarding park and performance stage in the northern (green) end of the Level.  There is considerable local opposition to this idea - the feeling being that the northern end of the Level should stay green, and the skate-park (for skate boards) should be refurbished but remain in the southern end.  This is acceptable to the skate-boarders, who don't mind where it is as long as they have one.  They are perfectly happy to stay where they are - in the southern end - with the available money being spent on smartening the skate park up.

An accompanying issue is a prospective bid to the Heritage Lottery Fund for a grant to refurbish the southern end of the Level based on its historical design. The council have suggested  this will be lost if the skatepark remains where it is.  It is true that the present skate-park is in a different position to that of the original play area but this seems a minor consideration compared with other changes proposed for  the 1930's design.  The green nature of the Level's northern end is a much older inheritance and is surely of equal or even greater value in this densely urban area. It should be preserved.