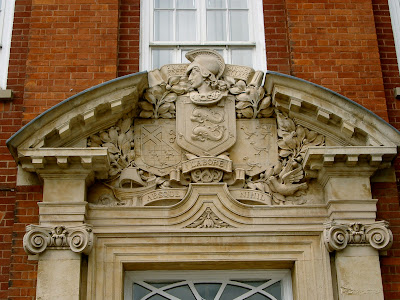 This rather splendid entablature over the main entrance reflects the original occupants of the building, the Brighton, Hove & Sussex Grammar School which moved here from Buckingham Road in 1913. It thus shows from left to right the shields of Hove, Brighton and Sussex surmounted by the head of Athena. Unfortunately its artistic integrity has been diluted by the later addition of a carved scroll behind Athena's head which records the present occupants, the Brighton, Hove & Sussex Sixth Form College, which moved here in 1975. This seemed to have been a rather pointless exercise,  some of the lettering is obscured by Athena's head and at the same time, by filling-in the dramatic gap in the arch, it lessens the overall impact of the work.
Many of the original pupils would have studied Latin as a matter of course. "Grammar" referring to the latin kind. The motto translates as "Without Work Nothing". 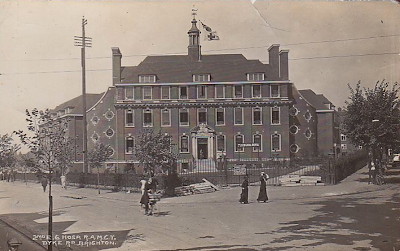 The Grammar School hadn't been there long before the building was taken over by the military as a Great War hospital.
at 11:09