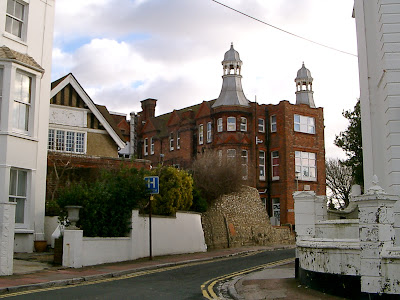 The exhibition is at Hove Town Hall from Monday 16th August  to Saturday 21st August. The Brighton Society website has an informative preview on the two alternative proposals being exhibited neither of which is said to satisfy the Planning Brief.

The photo was taken in January 2004, long before any serious deterioration had set in. After the Public Inquiry the site was made secure so that this view is now partly hidden by hoardings.  The buildings themselves are increasingly looking sad and neglected.  I have a nostalgic affection for nearly all of the site. Its collection of quirky buildings of different periods was attractive from almost any viewpoint, not the least this one. It will, of course, never be the same again.
at 18:09