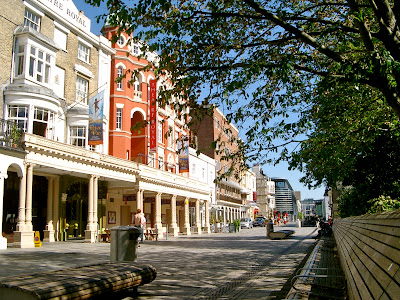 It was termed "New" in 1805 when the Prince Regent had it created to divert traffic from that portion of Great East Street that ran right past his Marine Pavilion's front door.

Two years ago, in pursuit of the new concept in traffic management known as "shared space" the entire street was attractively resurfaced with granite blocks and provided with extensive seating. It is generally agreed that this has been a considerable success. Overall it is said to have achieved a 93% reduction in motor vehicle trips, alongside a 93% increase in cyclist, and 162% increase in pedestrian usage. When it is full of pedestrians the few cars that venture along it do so at a patient crawl.

It is unfortunate that it comes to an abrupt end at the Church Street crossover to Jubilee Street, where the pedestrian, perhaps lulled into something of a false sense of security, has to immediately be aware of the fast traffic in Church Street. It is to be hoped that a better crossing arrangement will eventually be provided.
at 23:41