Please can we have the flagpole back? 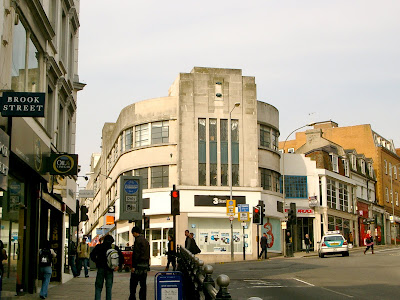 Imperial Arcade was originally built in 1923 on the site of the North Street Brewery, but was rebuilt in 1934 with the adjoining Arcade Buildings added in the style of the day, resembling the prow of a ship*. It has mounting brackets for 4 flagpoles, 3 on the Western Road side and another at this visually important elevation. The brackets appear to be made of bronze and in good condition except the upper mounts are missing the clamping piece. I wonder if they were safely stored or sold for scrap?

To my eye the whole design ethos of the building appears to have been woefully frustrated by the loss of its poles, with or without flags.

*From "the Encyclopaedia of Brighton" by Timothy Carder.
at 11:29