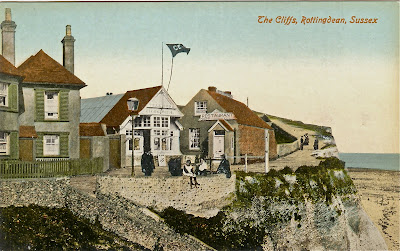 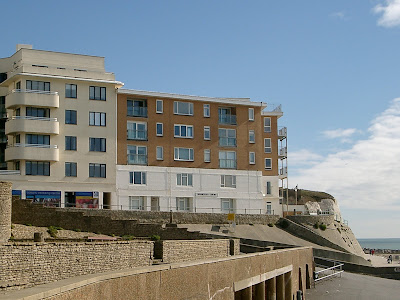 The twentieth century was not kind to Rottingdean. A downland village which, because of its geographical location was unique in Sussex, possibly along the entire South Coast, in enjoying an economy based on farming, fishing & smuggling.  It  was inevitably visited by the developers, and perhaps some change was inevitable, but one wonders if the results needed to be quite so uncompromisingly bad.

In 1904 the cafe shown in the top picture was known as 'the Geisha', probably following the craze at that time for all things Japanese. It was owned then by an A.J.Crouch. It continued to exist well into the 20th century.  Many will still remember it as the favourite destination of a Sunday afternoon walk along the Undercliff. Later, after a cliff fall obliterated the path along cliff edge, patrons were allowed, if they so wished, to exit by the back door to continue their walk up the cliff. The right-of-way was never re-established, yet it was presumably open to the Council's Planning Department to insist on it as a condition of development.

Rottingdean is honeycombed with now bricked-up smugglers' tunnels. One of them leads to the Grange. The Vicar, Dr.Thomas Hooker who ran a famous school there, is said to be the model for the parson in Rudyard Kipling's poem "The Smuggler's Song":-

"Five and twenty ponies. Trotting through the dark -
Brandy for the Parson, Baccy for the Clerk
Laces for a lady; letters for a spy,
And watch the wall, my darling, while the Gentlemen go by!"
at 17:08