The "Save Saltdean Lido" Campaign 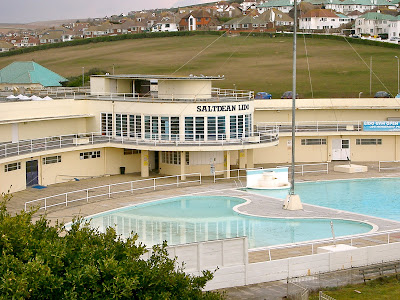 On the evening of the 11th March the prospective developer of the Saltdean Lido site held a public exhibition and consultation on its proposals. It was reported in the Argus here. This event seemed to be very poorly advertised. Saltdean, although outlying, is part of the City and many residents, still mourning the loss of the Blackrock and Rottingdean pools, would I am sure have liked the opportunity to attend. But no matter, Saltdean alone seemed well equal to the challenge. A Facebook group was immediately formed and the number of members has already reached the staggering total of 2327. This Campaign really has legs!

Such progress has been made that it already seems as if the developer will have to think again. Much more of the building and its anciliary features have been listed than appears to be the case from the City Council's 'Summary List of Historic Buildings'. One wonders if the architect was relying on this rather than checking with English Heritage for the full details.