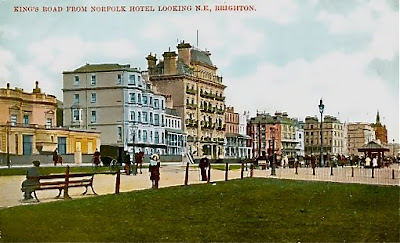 This postcard from the early 1900's provides, on the left,  a glimpse  of Western House, the private villa that once stood, where Embassy Court stands now, on the corner of Western Street and King's Road. It is the house on the extreme left of the picture and was well named, as it is actually the last house in Brighton when one travels west along King's Road. The Brighton-Hove boundary runs behind the houses on the western side of Western Street and so passes between Western House and the first house in Brunswick Terrace. In the 1850's Western House was occupied by Lady Hotham.

Embassy Court also took in the sites of nos.1 to 4 Western Street, no.2 Western Street being the site of H.Buggins's Brunswick Baths. In 1857 the proprietors advertised that they were able to supply families 'with hot or cold sea-water in any part of the town', at a charge of 4d a bucket if hot, and 3d if cold. The sea-water was pumped to the baths by means of a steam engine.*
*'Life in Brighton' by Clifford Musgrave.

The photo below shows the same view as it is today. 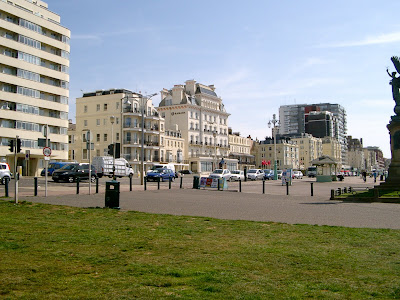