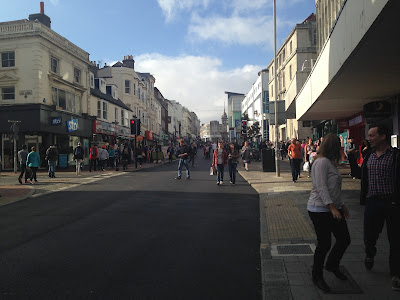 The temporary pedestrianisation of North Street for resurfacing has demonstrated what a difference the absence of buses makes. The air is noticeably cleaner and the general environment quieter, calmer and more relaxing. People seem less rushed and have more space to just saunter if they feel like it.

Meanwhile, along the King's Road diversion the buses are less blocked in than in North Street, there are sea breezes to disperse the fumes and plenty of space on the upper & lower promenades for pedestrians to put a distance between themselves and the traffic.

If North Street were to be permanently pedestrianised the needs of less mobile people could be met with small electric shuttle buses running between the Old Steine and the Clock Tower with perhaps a couple of intermediate stops.

If such a scheme were considered too far-reaching a useful halfway house would be to make North Street one-way west to east. Traffic emits less pollution when travelling downhill and buses would have more space to pull away at bus stops and so minimise waiting and engine idling times.