The Grade II* listed West Blatchington windmill has been awarded the 2017 Public & Community Award from the Sussex Heritage Trust.

The  announcement  follows a £100k restoration  -  a joint project by Brighton & Hove City Council’s Property & Design Team,  Fowler Building Contractors,  Baqus Construction Consultancy Ltd and  CTP Engineers, in consultation with The Friends of West Blatchington Windmill which contributed half of the funding. 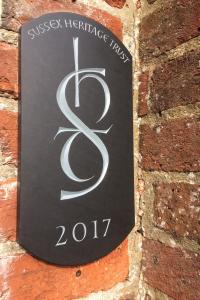 The award, a commemorative plaque, was attached to the Grade II* listed structure, at a special ceremony last week.

The judges commented: “The Mill is a fantastic heritage asset, a museum both of its own history and of windmills in general. The Friends of West Blatchington Windmill are to be commended for their effort, energy and enthusiasm in its preservation, without which it would almost certainly have been lost.

The 74- week long restoration project, led by the council’s Property and Design team, saw specialist contractors carrying out structural repairs to the fan tail and gearing mechanism, reefing stage decking and supports.
Weatherboarding  and flint walling were also repaired and the mill and barn repainted in a traditional colour to replicate the original tarring. Existing materials were reused where possible and work was careful programmed to minimise disruption and ensure safe access for the general public attending classes in the attached barn.

West Blatchington Mill, which was beautifully illustrated by John Constable in a watercolour 1825, is open to the public on Sundays and Bank Holiday afternoons from May to September. School parties and other groups are shown round at other times by appointment.