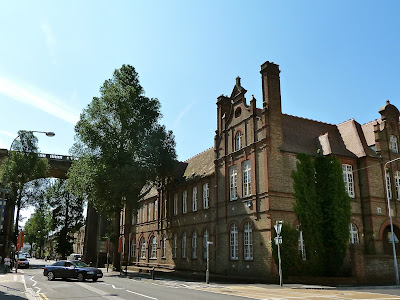 The Preston Road school building of 1880 by Thomas Simpson occupies a prominent corner site and lies on one of the main routes into the city. Its steep roofs, flamboyant pedimented gables and tall chimneys are a notable feature of the skyline and the school contributes positively to the setting of the grade II* listed viaduct of 1846-46, which is built of similar brick. The school was locally listed in 2015.

Planning application BH2017/01083 proposes conversion to 25 flats of one, two and three bedrooms, all with mezzanine floors. Rooflights will be inserted in the existing tile roof to extend the accommodation area into the loft. A rear infill extension will be inserted at first floor level. Other associated works include cycle and bin store, new pedestrian access to the building, communal garden space and associated landscaping. The development is to be car-free with cycle parking only; residents are to be forbidden parking permits.

Locally-based Yeo Architects seem well apprised of the building's heritage value. The Heritage Statement recommends retention of the best original features of the building and elimination of subsequent excrescences. An existing later building to rear of property will be demolished. Iron railings in the style of the originals are to be installed at the front & side of the property A cobble wall at the rear of the property, which predates the school, is to be restored.