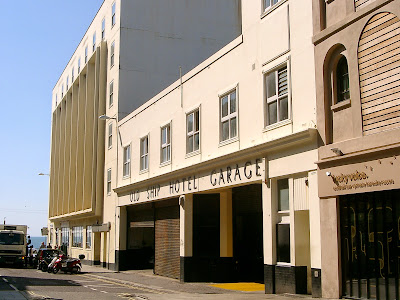 Councillors have unanimously approved planning application BH2014/02100 for the three-storey garage fronting onto Black Lion Street to be demolished. It would be replaced with a new six-storey building with eight one-bed flats and 10 two-bed flats. Forty per cent of the flats would be affordable housing, with tenure arrangements still to be decided. There would be cycle parking and spaces for 14 cars.


Under conditions to be agreed with the council, developers would be required to contribute £45,000 towards open spaces and indoor sports, £12,000 for real-time bus information boards, £20,000 for education and £14,000 for public art. They would also be required to make a £9,000 contribution to local job creation and employ 20 per cent local labour during building.

Parts of the Old Ship date back to 1767 and are Grade 2-star listed. It is generally a good redevelopment but the suggestion by CAG and others that the iconic 1920's lettering be somehow salvaged and reused on the new building was dismissed. Presumably because the Planning Officers who reported on the application were not Brighton-born and bred.