The Drove Cottages, Patcham: then & now 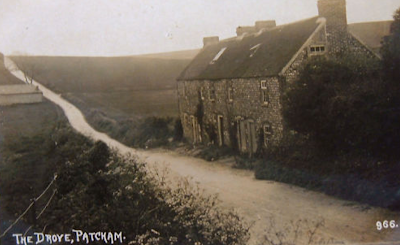 The Drove Cottages were built in 1815 for the poor of Patcham. This location would then have been rather isolated being a quarter of a mile from the village itself and with a steep hill in between.

Later in the 19th century, with the wealthy of Brighton moving to expensive properties in the Preston area, the Drove Road became part of a popular circular ride taking in Patcham, Stanmer, and back to Preston (or vice versa) and hence acquired the name Ladies Mile. It is actually slightly more than a mile between Patcham and the Ditchling Road at Old Boat Corner, and the present metalled section of the road is slightly less than a mile long.

Following the incorporation of Patcham in Greater Brighton in 1928 the developers moved in, and by the end of the 1930's the whole of the Ladies Mile estate had been developed. The cottages were heavily-restored and now seem almost part of a separate village with a pub, methodist church (in a converted barn), a parade of shops and a clock tower.

The grassy bank on the right of the photos fronts allotments and appears to have been largely undisturbed, a relic of the original countryside.