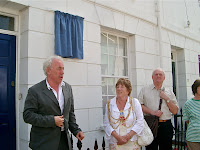 On 29th June 2009 a plaque to Peggy Ramsay was unveiled at her Brighton home at 34 Kensington Place in North Laine. Peggy Ramsay was probably the best known play agent in the United Kingdom during the second half of the Twentieth Century.
During her lifetime she dedicated her principal activity to British theatre and acted for (sometimes found and always nurtured) the majority of the best known writers for the stage in this country; Alan Ayckbourn, Robert Bolt, David Hare and Alan Plater to Eugene Ionesco, Joe Orton, Stephen Poliakoff and J B Priestley to name but a few.

Her estate was left for charitable purposes to help writers and writing for the stage with especial reference to her friends and clients and The Peggy Ramsay Foundation was established in pursuance of this object. The Foundation has financed this plaque and was represented at the unveiling by trustee and long-time friend of Peggy, Simon Callow CBE, and trustee John Tydeman OBE. Simon Callow performed the unveiling
Also present were the Lady Mayor, members of the City's Commemorative Plaque Panel and members of the North Laine Residents Association. The unveiling was followed by an informal reception at the Theatre Royal. 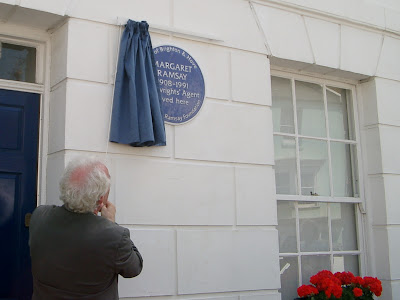