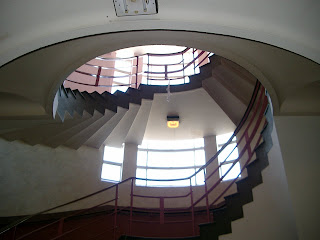 This is the central art deco staircase in the Ocean Hotel, Saltdean. It spirals from top to bottom in a graceful swoop and one of its most remarkable features was the continuous handrail in solid brass.   This photo was taken in 2005 but  about 18 months later, shortly before the present developers took the premises over, some "Jack the lads" turned up with a lorry and ripped the handrail out. (Still lets give them the benefit of the doubt - perhaps they wanted to donate the scrap money to "Children in Need"!) Nearby residents saw it happening but assumed they "probably" had permission. The developers are committed to restoring period features but what's the betting the new handrail won't be in solid brass.
at 14:16