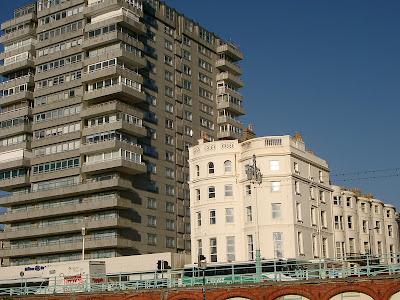 The building on the left of this photo replaced the late-Georgian Bedford Hotel after it burnt down in 1964. Closer viewing does not reveal any compensating factors for its unfortunate intrusion into the vista from the top of Victoria Street. (See previous entry). Shortly after it was built some of the tiling of the facing panels fell off and had to be replaced. Apparently they could not find matching ones. Maybe they had used an "end-of-line" bargain lot. This accounts for rather peculiar diseased appearance of the frontage. So, no net gain in visual amenity there then.

In cases like this it would be good if the architect could be asked to revisit his creation and invited to interpret the building, and explain what message the critical observer should try to take from it. Otherwise we are entitled to believe that he cared nothing for the elegant, historic building it replaced, or that he was concerned at all for the intrusion of his design on to a world-famous seafront, or that he took any account of the scale & style of nearby listed Regency Square.
at 18:07