The destruction of architectural history 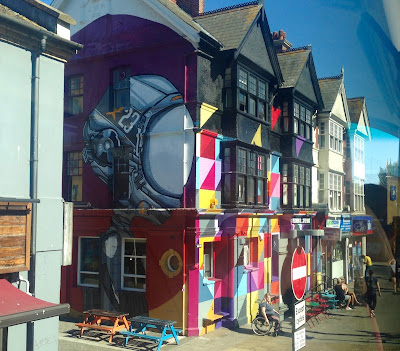 This Edwardian terrace 114 to 117 London Road was built in 1904. It was a fine example of architectural style in transition away from the ornate decorative flourishes of the Victorian Age. Yet it still references the Art & Crafts style in the shallow rectangular bays surmounted by inset gables and the small-paned upper sashes of the windows.

The builder was evidently proud of his work as he has left his  initials (JWP) high up on the gable ends in Francis Street & Oxford Streets. He should be proud as his work appears to have withstood 114 years without any structural deterioration.

In 1924 the ground floor of 114  & 115 was taken by the Midland Bank, later HSBC, and the frontages were maintained in their original condition, revealing red brickwork and contrasting cream plaster, for over 80 years. Some of this can still be seen in no.117.

In contrast nos.114 &115 have over the last year or two received a new paint 'job' every few weeks and each time with not the slightest regard to the architectural features. This has culminated in the visual cacophony shown above which seems almost to have as it main aim the obliteration of the architects vision.