A Visit to St. Wilfred's 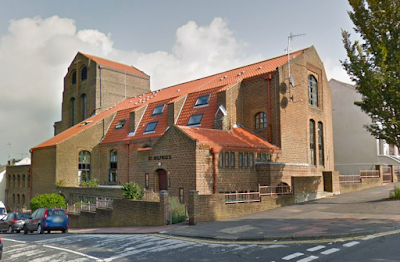 St. Wilfred's, Elm Grove, grade II listed, was designed 1932-4 by modernist architect Goodhart-Rendell, a local resident, who also designed Prince's House in North Street. The style is said to be Rational Eclectic but showing influences of Norman Shaw and Charles Rennie Mackintosh. In other words it is pretty unique and Brighton is lucky it has survived albeit in the form of residential apartments. The conversion has, however, been sensitively handled.


St.Wilfred's has an added claim to fame in the murals that were added to the plain walls of the Sanctuary in 1940. These were by the Modernist artist Hans Feibusch.


The murals deteriorated seriously after the church closed in 1980, due partly to a leak above the LH wall. They have now been restored thanks to a fund-raising campaign led by the Hyde Group who manage this property and contributions from American Express and Axis.

The area in which the murals are situated is self-contained within the building and above one end of the ground floor car-park. The possibility thus exists for the murals to be made accessible to the public by inserting a small staircase or lift. Phase 2 of this Hyde Group project is to raise the funds for this through a crowdfunding campaign.

Interest in the works of Hans Feibusch has soared in recent years with growing appreciaton of the Modernist Movement in the first part of the 20th Century. One of his murals in St.Mark's, Coventry, which is 40ft. high, is also undergoing restoration.