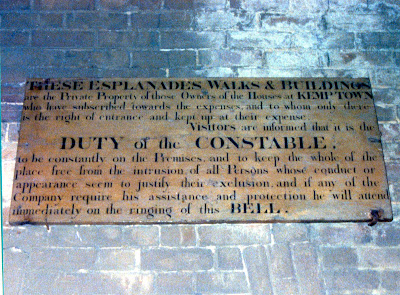 This notice is situated high up on the wall of the tunnel that leads from the south end of the Lewes Crescent enclosure under Marine Parade, and exits onto the upper terrace of the Esplanade Slopes. The tunnel exits between two inconspicuous, one-up, one-down cottages built into the face of the cliff, one of which was occupied by the gardener and the other by the constable. The notice dates from 1895 when it was set up in the lobby of the constable's cottage. It has its origins in a long-running dispute between the Gardens Committee and the then Brighton Corporation over the rights of public access to the Slopes. The dispute started in 1865 and was not finally settled until 1902.

In the following photo the top of the tunnel exit (with glazing) can be seen on the upper terrace with the constable's cottage to the right. The lower colonnaded shelter was known as the Reading Room. 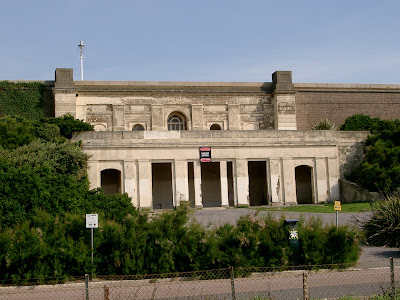