A Plaque to Margaret Bondfield MP 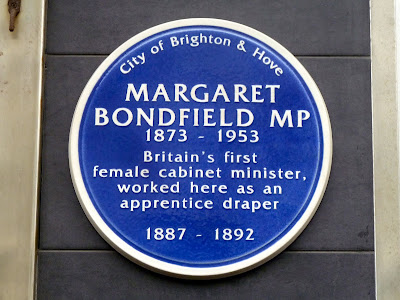 Britain's first female cabinet minister was commemorated today with a plaque at 14 Church Road, Hove. This follows a successful campaign by the Hove MP Peter Kyle aided by the Women's History Group and the Commemorative Plaque Panel. Unveiling was performed by Rachel Reeves MP, the author of "Women of Westminster".

Peter was eloquent on Margaret's personal qualities which drove her from the humblest of beginnings to achieve a seat of power to alter society for the better.


Margaret experienced the appalling conditions for 'living-in' shop staff at various stores in Brighton and was driven to become a member of the shop-workers' union.

She was elected to the TUC Council in 1918 and became its Chairman and an MP in 1923 and a parliamentary secretary in the Ministry of Labour from 1929 to 1931.