The Story of Michael Fairless

In August 1901 in the garden room of Mock Bridge House, Shermanbury, West Sussex, a 33 year old woman Margaret Fairless Dowson lay dying of tuberculosis and acute nephritis. She had been unable to take anything but water for 12 days, was almost blind and speech was difficult, but in spite of this, succeeded in dictating to her adoptive mother, Mary E. Dowson , the last chapter of “The Roadmender”. 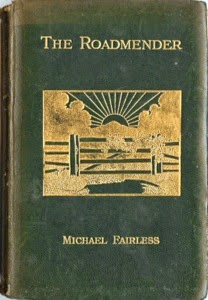 The Roadmender was published on 28th February of the following year by Duckworth & Co. and was reprinted six times in the same year ; impression followed impression and by 1913 the 32nd impression had appeared. Its sales were further boosted, during and after the Great War , by the thousands of the bereaved seeking consolation in its pages. It has never been out of print since. The last edition was printed in 2005. 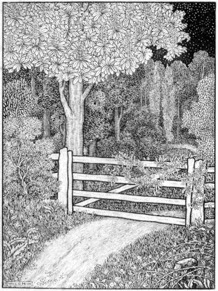 “The White Gate”.
The frontispiece to “The Roadmender “
by Will G Mein.

Michael Fairless passed through her “White Gate” on the 24th August 1901 and knew  nothing of the success of her writings.